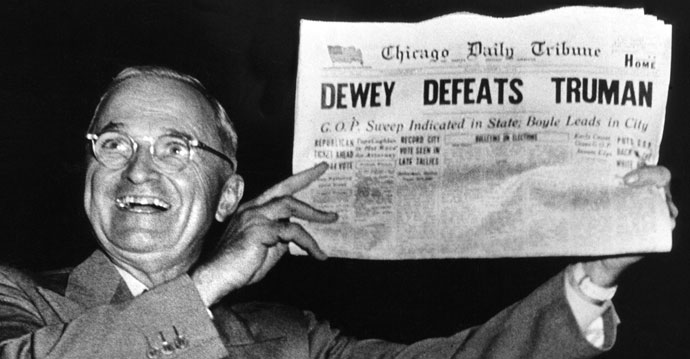 Last week I spoke about catastrophe theory, and the way things can go belly up pretty quickly, from a seemingly impregnable position. It can happen in business (think Kodak, Blockbuster, Australia Post..) and sport (countless examples – including the French golfer who blew up in the last at Carnoustie in 1999).

It can happen in reverse. From adversity comes salvation. Harry Truman was supposed to lose the 1948 Presidential election, so much so the papers had already printed the front cover giving the election to his Republican opponent Thomas Dewey (see pic above). It was the 5th straight win for the Democrats, after Roosevelt won 4 times then died in office handing the Presidency to a simple Missouri ex-haberdasher. Analysis post victory, put the win down to Truman’s personable and vigorous ‘old-fashioned’ campaign style, which rang true with the Democratic base.

A few weeks ago I played 9 holes of golf at my local public course, Wembley. I’d not played for a few weeks so was not expecting anything. It was a gorgeous spring afternoon, and for some reason the course was half empty. With no one holding us up ahead nor pushing us from behind, we played at our own pace. I relaxed, and shot the best round there, beating 40 for the first time. It was capped off with an outrageous putt from off the green down a slope and smack bang into the hole. The beers tasted good that evening. A week later I was back at the course and could not get within 10 shots of that record. It’s a frustrating game – it keeps me coming back!

Last week my U-12 cricket team, coming off an amazing 335-4 score in the previous game scrambled to 9-76 against a team that I thought was no better than any other team we’d played against. Over confidence perhaps? The opposition were 7-75 after day 1. Yesterday, we continued our innings with only one wicket remaining. I implored the team to bat responsibly, and probably helped by a week off and chance to think about priorities, they applied themselves and added another 51 runs for the last wicket to get us up to a respectable 127. Our opposition therefore had to score 53 with their last 3 wickets to win. We managed to bowl them out for 124, to win by just 3 runs, with a smart gully catch to complete the game. What had seemed hopeless a week ago became possible.

Snatching victory from the jaws of defeat is the most amazing feeling .. in sport, in business… it’s the art of the possible. One important ingredient is never to give up. If you give up, then there’s absolutely no chance.