Smart leaders are no longer casting themselves as solo visionaries, but are rather rewriting the rules of innovation, so claims Harvard Business Professor Linda Hall.

Together with a few other CEO-types, I was privileged to spend a half day with her recently in Perth courtesy of the RAC. She writes on leadership of innovation, and her central case was the recently departed Director for Technology and Innovation in Obama’s White House, Tom Kalil. Tom had the difficult job of trying to build innovation throughout the various realms of government (and of course, he was then summarily dismissed by You Know Who who then put his son in law in charge of the same project.) 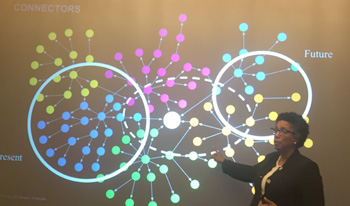 Tom had to build coalitions, get funding and convince the most conservative types that change was necessary. Innovation was not an option, it was an imperative. He did this by talking to people, being open, listening. It was all on the tight time frame, as his appointment was political. But huge amounts of progress was made, and he left with a very high reputation. He spoke of creating “policy entrepreneurs” and made it acceptable (and, indeed, the norm) to have innovation in government.

Knowing that most conversations in organisations happen horizontally, he knew he had to break down silos to get communication going up and down the organisational levels.

Leading innovation requires an organisation to do two things at once:

The difficulty comes, argues Professor Hill, in integrating the future with the present. 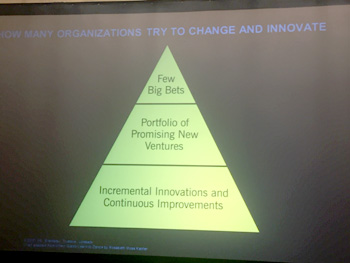 Leadership is a multi-levelled skill:

Leadership run amok is a state where high achievement, high affiliation and power balanced people work hard, have high maintenance, but can balance all the main drivers. Great leaders unleash the powers within their teams, from where innovation comes.

Why most new products fail