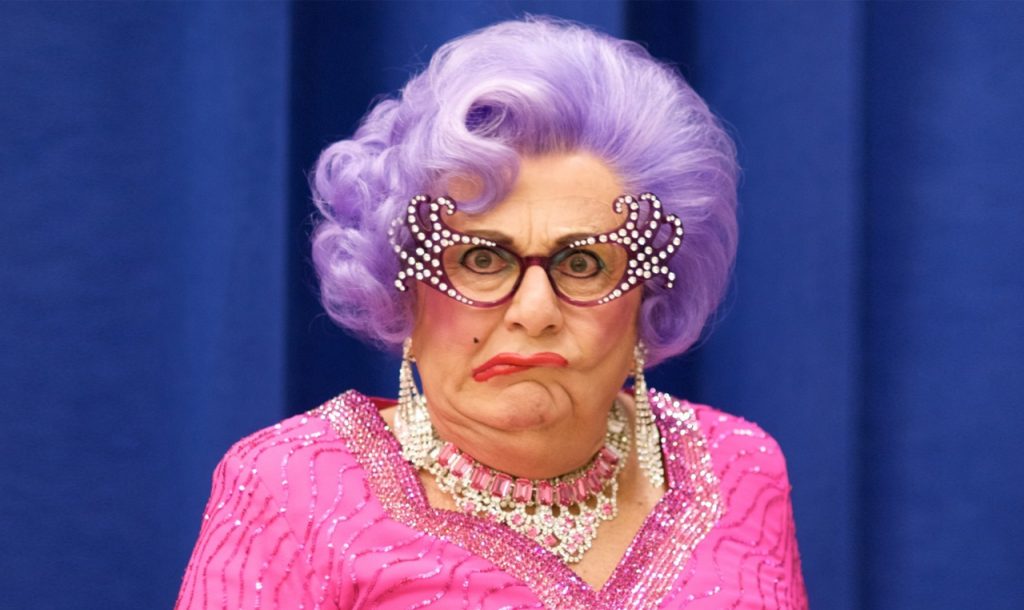 In the second post of this series, I recall 20 years ago when an evening with Dame Edna led to a memorable phone message, and a dotcom idea …

Before the idea was born, there was context. A back story. A breeding ground for an idea, with a few push factors that made me look away from teaching, and some pull factors that drew me towards the dotcom idea.

But ideas are just that, ideas. Nothing more than a thought. We must have hundreds a day. What always interests me though is why some ideas become more than an idea, and how they translate into action…

An Evening with Dame Edna

It was a totally unrelated evening out that led down the path to the business that became aussiehome.com.

I’d always loved Barry Humphries, and after a particularly frustrating day’s teaching I was looking forward to a good chuckle with the brilliant Aussie comic.

For some reason we had seats in the second row. Not a great idea if you want to stay a safe distance. Humphries is renowned for ripping into the audience and making them part of the act. Personally, I’m not a huge fan of humiliating paying customers. If I wanted to be part of the act I’d sign up. You entertain me. That’s what I’m paying for. It feels like a breach of the relationship to make fun of the audience, but it’s a long trodden path for many entertainers.

During the first half, he did all his other characters … Sandy Stone, Sir Les Patterson and all. I remember him making eye contact with me a few times. Was I imagining that, or was he sizing up potential victims for the second act?

It was the latter. After the interval he bounded onto stage as Dame Edna, and lights went up on the first ten rows. We all shifted lower in our seats.

After a few minutes he started down our row asking what we each had for dinner. When he got to me I blurted out something or other. Rather than moving on, he stopped and said “What a delightful couple we have here, ladies and gentlemen, what are your names darling?”.

I suddenly felt my face reddening, and within a few minutes he was ordering a meal for Lisa and I from the Subi Hotel from across the street – on a gold plated phone brought out on a silver salver no less.

Twenty minutes later, the meal arrived and was set up on the side of the stage.

“Agh, where’s my lovely couple?” he said, as he motioned towards us both. Now, I am happy to be on stage, but I was not sure how well Lisa would go. ‘Losing face’ in public is about the worst thing for Asian culture.

The old professional that he is, Humphries understood this instinctively. He gave Lisa a huge peck on the cheek, and settled us down on the table on stage, and carried on his act. I was too nervous to eat, so tucked into the white wine. Over the next hour he got other people up on stage, and was perfectly lovely with us. He was very motherly with Lisa, and we actually relaxed and enjoyed the rest of the show.

Perhaps, we had the best seat in the house.

Arriving home there was a message on the answerphone. “Hey Charlie, Nick here, ring me back; we’re going do properties on maps, you and me baby!”

So I rang my fellow MBA grad Nick Streuli back and we chatted for a while about his idea of a map-based property website. You have to remember that in 1999, property listings were almost exclusively in the weekend papers. Property web sites were few and far between, clunky, had little content and were not updated. Print ruled.

We both knew the internet would make an impact on this market, and disrupt the way properties were marketed, and how people would search.

It was a big idea. But what would convert this idea into a business, one we could actually run and what should we do next..?